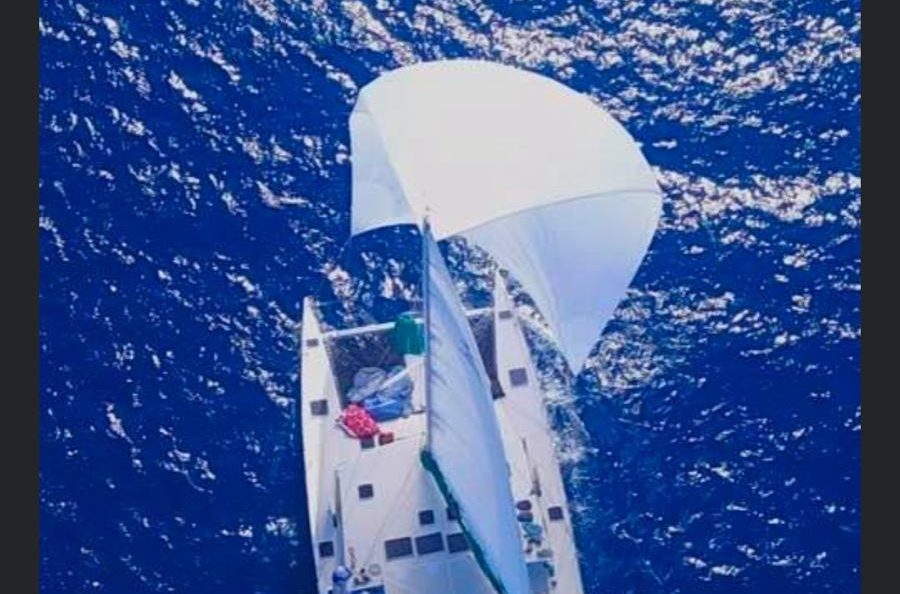 Baja Haha 2019 another great event with a little twist at the end.

The 2019 Baja Haha once again had 132 boats and 423 people that “cheated death again” as the Grand Poohbah aka Richard Spindler the founder and leader of the Baja Haha tells the crowd as they arrive in Cabo San Lucas.

The event this year started a week later than previous years to not overlap in Cabo San Lucas with the biggest money sport fishing tournament in the world the Bisbee. This worked in favor of the conditions sailing down the coast as most boats encountered near perfect sailing conditions day and night and only running engines to charge batteries. As with most cruising around the world, many boats found their weak points early on and solicited help from many of the marine professionals around the fleet to get things sorted out. Several boats had sail damage and Ullman Sails San Diego and Ullman Sails Puerto Vallarta owners were on hand to do repairs to get the fleet to Cabo and enjoy the sailing.

Every year at Bahia Tortuga (Turtle Bay, the first stop) there are two events, the Baseball Game, and the Beach Party. This dusty little fishing village has a grand baseball field with covered stands and artificial turf. In fact, it may be the only green thing on the west coast of the rugged Baja peninsula. The Baja Haha crowd line the field alongside the local little league kids and everyone gets a hit. It is a great event followed by a large donation of sporting goods to the local kids donated by the boaters.

The following day the beach party has a male-female tug-a-war (won by the women every year), volleyball, dancing, and games. Hot dogs are sold for $2.00 each to raise money for a school lunch program in Punta de Mita. This year with the generous donations of a few to boost the pot over $700.00 was raised.

Like all events associated with the Baja Haha, the party ends while it is still daylight so everyone can get back to their boat safely in preparations for the early departure the next morning for Bahia Santa Maria.  Many of the Haha members had the great wind on this leg with a few reporting a squall that hit just over 30 knots for about an hour. Boats arrived in near-record time to Bahia Santa Maria and had a day and a half to check out the nature sites, great vistas, and beach comb along the long sandy beaches or mangroves. This is always the favorite stop on the trip. It is completely desolate except for a few structures on a bluff for the fisherman to wait out bad weather. But when the Haha comes with 130 plus boats a band from La Paz makes the 18-hour journey through beaches, barges, and dirt roads to play rock and roll music on the bluff at Bahia Santa Maria. This is truly one of the most fun and surreal events anyone has ever attended. Dancing with a spectacular view without a residence in sight, just a bay full of sailboats.

This year the Baja Haha took a detour just a short trip around the corner to a beautiful little part of Bahia Magdalena at Man of War Cove. This was a short but active stop with an impromptu kid’s diving competition, paddleboard kayak race, and music night. The music night will most likely be an annual event.

Leaving Man of War Cove on Thursday morning was a little chaotic as an extremely late-season tropical depression had started south of Cabo San Lucas and it was unclear what direction it would head as many of the weather models did not agree. Some of the boats that did not have guaranteed slip in Cabo San Lucas or San Jose del Cabo elected to stay in Man of War Cove and wait until the system past. Others headed to Cabo San Lucas. As it turns out the storm became Tropical Storm Raymond but then quickly dissipated bringing only moderately heavy winds but lots of rain to the Baja Peninsula. This caused flight delays and cancelations adding to the adventure of sailing down the coast to Mexico.

The boats that did make it to Cabo San Lucas got to participate in the annual el Squid Roe party letting loose and playing hard for an evening to celebrate “cheating death again”.

The Baja Haha has something for everyone and is a must add to the bucket list.